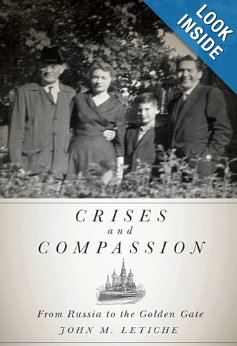 Crises and Compassion: From Russia to the Golden Gate (Footprints Series)

John M. Letiche started life as Ianik Letichevsky, a citizen of the newly constituted Union of Soviet Socialist Republics. The son of a brilliant but dictatorial father and a loving, cultivated mother, he went on to a remarkable career as an accomplished scholar, professor of economics, and adviser to governments. Letiche, now in his nineties, provides an intriguing look at the changes that have occurred during his lifetime. Following his Kiev childhood and formative years in Depression-era Montreal, he completed a doctorate at the University of Chicago and took up a Rockefeller fellowship at the Council on Foreign Relations in New York City. As a technical advisor to the Economic Commission for Africa he conducted trade talks with both gifted and corrupt heads of state in sub-Saharan Africa, and later shared a working White House dinner with an infamous American president. His half-century-long teaching career at Berkeley included a front row seat for the Free Speech Movement and the most documented student revolt in popular history. Told with humour, insight, and humility, Crises and Compassion moves nimbly among weighty events and meaningful personal history, showing how “civility in intellectual exchange” came to be the guiding principle of a life of monumental experiences (Amazon)

Crisis & Compassion – From Russia to the Golden Gate

“Dr. Jack Letiche’s twentieth century journey instructs, entertains, and inspires the reader who will finish the book better off on any account, but above all for the time spent with the life and mind of a great thinker and global citizen.”

Jeremy Kinsman, Canadian Ambassador or High Commissioner in Moscow, Rome, London, and Brussels, and Regents’ Lecturer 2009-10, University of California, Berkeley
Help other customers find the most helpful reviews
Was this review helpful to you? Yes No
Report abuse | Permalink
Comment Comment

5.0 out of 5 stars More than Economics – Professor’s Memoir A Real Life Rags to Riches Adventure, March 19, 2011
By Burt Kaufman

What a read! What a Life – and it seems a long way from over for renown Berkeley Economics Professor John Letiche! Now in his early 90s, Letiche has written his fourteenth book, his fascinating memoir recounting an almost unbelievable journey from a childhood in Russia, rife with anti-semitism, to adviser to world leaders. The book reads almost like an adventure story in its real life drama, including a serendipitous marriage proposal, an eye-opening meeting with President Nixon and, later, historic conferences with the Council on Foreign Relations.
One might expect a book written by an economics professor to be very technical but this book, written sans ghostwriter, is easily readable for all ages and education levels. Letiche has a very colorful, yet concise writing style.
This is less a tome on economics than a real life story one must read to appreciate. It might even affect your own life.
Crisis & Compassion – From Russia to the Golden Gate

From Anti-semitic Russia to the Golden Gate and more motiviational stories  , 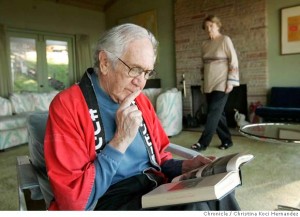 From Anti-Semitic Russia to World Advisor