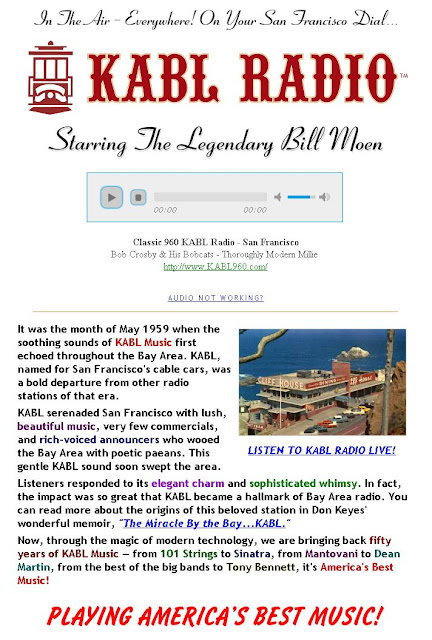 It’s nice to see some of my past is still around. Was pleased to see Bill Moen’s letter to the editor in San Franicsco Chronicle     the other day….  Moen was the lead broadcaster / DJ / Announcer on San Francisco-Oakland’s KABL ‘MOR” (middle of road) radio during the ‘Golden Era’ fifties and sixties right on up not that many years ago when the station was, unceremoniously sold / changed – and never replaced (How could it be)… So, what did Moen do but put his new digital  technical skills to work and keep the station on the air at KABL960.com. Give a listen! You’ll be glad you did…
Funny , growing up as a kid I didn’t appriciate this kind of music as I do now..  Great variety, frombig band to 50s crooners to even some of the better later music – and lots of Moen humor and trivia thrown in…. Didn’t realize KABL was broadcast out of the legendary Cliff House Restaurant

at Land’s End, overlooking the beautiful Pacific Ocean (next to the old Sutro Bath House!  )
We’ll be doing some more features on KABL and Bill, I’m sure, in the future… San Francisco – Oakland had so many great stations during THE ERA… KSFO, KEWB, KYA, KDIA, KOBY along with KABL with legendary DJs or broadcasters like Don Sherwood, Russ The Moose Syracuse, Al Jazzbeau Collins, Bobby Dale, Gene Nelson, Tommy Saunders, Tom Donahue -and many more.. Plus, even legendary Gary Owens and Kasey Kasem (who celebrated a birthday last week) came through town (KEWB) to work a spell.well as other Radio.. KYA , we’re happy to say, still LIVES much like Moen’s KABL. You can listen to it here thanks to long timeKYA DJ Gary Mora .  Gary’s got some nice